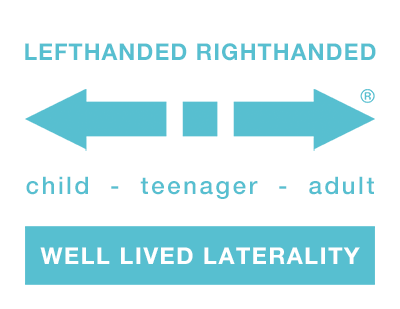 TWO SOLUTIONS TO LIVE IN HARMONY WITH YOUR LATERALITY

Laterapedagogy can be preventive if applied to left-eyed and/or left-handed children when they are about to start school.
It focuses on the structuring of laterality and a better adaptation to the thinking, writing and reading system of society – in our case, Western and right-handed.
It prevents the child from developing a dyslaterality (dyslexia, dysorthographia and related symptoms). This pedagogy focuses on structuring and restructuring laterality for anyone struggling to adapt to our particularly right-handed system and who has developed cognitive and conative (volition) disorders. Laterapedagogy includes reading and writing processes, tools such as the arrow card for reading, the Canson tracing paper notebook and the double-sided whiteboard ®, or mirror whiteboard, for writing, as well as a user guide for parents and teachers, How to Help Your Child Master Laterality.

But it is never too late for an adult, let alone a teenager, to recover all their cognitive and conative abilities thanks to laterapedagogy.
Although the book focuses primarily on young children, it remains relevant to any person of any age.

Lateratherapy is a form of psychotherapy guidance based on the impacts on identity, the individuation process, self-esteem and self-confidence.
It is designed for struggling dyslateralized children, teenagers and adults, struggling left-eyed and/or left-handed individuals,
whose cognitive, conative (volition – the ability to make choices), emotional and mental abilities may be disturbed.

The Importance of the Leading Eye

Why identify the leading eye?

The leading eye is the one that is more active when reading and following your writing, as opposed to the active dominant eye that is used to focus on a fixed point as it may not be the same eye in both cases.

If we consider the Western writing and reading system, which follows the left-to-right direction, we notice that:

➔ a right-handed and right-eyed person reads and writes in an “opening” direction towards the right. The system is adapted to their laterality. The two are in harmony.

➔ a left-handed and left-eyed person reads and writes in an closing direction towards the right. The system is not adapted to their laterality. The two are in disharmony.

This is because the logical opening direction when reading and writing for a left-hander is right-to-left.

by children as they start to learn to write.

The graphic gesture followed by the leading eye moves laterally and opens to the left, thus opening the chest and allowing better breathing, a better back position and a better hold of graphic tools (pens, pencils, chalks…).

As in the first instance the left-hander is allowed to use an opening movement towards the left so that they do not work in a counter-intuitive way, they are unlikely to develop attention deficit, poor concentration, headaches, eye / back / hand pains (the wrist does not need to be in a “swan neck” position when writing leftward!)…

These symptoms may be recurrent when the person is forced to function in the conventional left-to-right direction.

It is also essential to question the preconceived idea that a right-handed person is necessarily right-eyed. Out of 450 tested individuals who claimed to be right-handed and right-eyed, 52% turned out to be left-eyed for reading (dynamic lateral vision to the right)!
Additionally, 3/4 of these 52% said they experienced difficulties with reading, cognitive or emotional disorders, or suffered from headaches… (see symptoms on the home page). After the application of the laterapedagogy / lateratherapy protocol, all said that they noticed a reduction and even a disappearance of their disorders. The benefits of the method on physical, cognitive, psychological and mental balance are clear.
In the right-to-left writing system (Arabic, Hebrew), the same symptoms or disorders may appear.

How does it Work ?

The symptoms and disorders are treated following the same 3 focal points:

Depending on the diagnosis:

➔ tools and strategies to rehabilitate your original laterality –

➔ tools and strategies to adapt to the left-to-right reading and writing system in the West and to the right-to-left system in the East.

FOCAL POINT 3 : LATERATHERAPY : PSYCHOTHERAPY GUIDANCE – BETWEEN 5 AND 15 EXTRA SESSIONS ACCORDING TO YOUR NEEDS

This psychotherapy guidance is tailored around the impacts on your identity, individuation process, self-esteem and self-confidence.

At the top of the page, you can start testing your dominant and leading eye(s) yourself as well as think about the impact of the right-handed system on your space-time representations.

For those who live far away, possibility of intensive support with group sessions

do the LEADING EYE PRE-TEST